Clinton’s running mate, vice presidential candidate Tim Kaine, will appear with Matthews. Although it is safe to assume Kaine is there to speak, perhaps he’ll perform a song with the DMB frontman. After all, Kaine is a harmonica enthusiast.

On Oct. 7, Warren will appear alongside Feingold during events aimed at students at the University of Wisconsin-Madison and UW-Milwaukee, Feingold's campaign said. Warren is expected to speak on college affordability and urge students to take advantage of early voting.

Feingold and Republican U.S. Sen. Ron Johnson are locked in a tight race.

Officials said Kaine would campaign “across Pennsylvania” on Wednesday and Thursday, including public events in the Pittsburgh and Philadelphia areas.

Details of the events were not immediately released, but people interested in attending the Philadelphia-area event on Wednesday and the Pittsburgh-area event on Thursday were invited to contact Democratic presidential nominee Hillary Clinton's campaign.

Hillary Clinton has no scheduled public appearances leading up to Sunday night’s debate against Donald Trump at Washington University in St. Louis.

President Barack Obama has postponed his planned trip to Miami to campaign for Hillary Clinton in light of Hurricane Matthew.

The Clinton campaign has yet to reschedule the event. The president had been expected to urge South Floridians — especially African Americans — to register to vote ahead of the state’s Oct. 11 deadline.

Donald Trump’s campaign also postponed a fundraiser with Ivanka Trump planned for Wednesday night at Trump National Doral golf resort. No new date for the event has been set yet.

The president is scheduled to speak Wednesday at 4:30 p.m. at Florida Memorial University’s athletic arena and wellness center in Miami Gardens.

The Obama event is scheduled to come two days after Vice President Joe Biden campaigns for Clinton in Orlando and Sarasota.

Two campaign events are planned — one in Green Bay and one in Madison.

Details are as follows:

Chelsea Clinton, the daughter of Democratic presidential nominee Hillary Clinton, will campaign in support of her mother in Sioux City on Wednesday.

People can RSVP to the event at Clinton's campaign website. However, the RSVP does not guarantee a seat at the event.

The formats for the 90-minute debates are designed to facilitate in-depth discussion of the leading issues facing the nation.

Democratic gubernatorial candidate Roy Cooper will introduce Michelle Obama Tuesday at a rally at the Charlotte Convention Center.It will be the first lady’s first appearance for the general election in North Carolina. She’ll campaign for Hillary Clinton in the same venue where her husband, President Barack Obama, campaigned with Clinton in July.


Bill Clinton is returning to Ohio to campaign for his wife as the 2016 presidential contest enters its final weeks.
The former president will follow up Democratic presidential nominee Hillary Clinton's Monday visit to the state with a bus tour Tuesday and Wednesday through eastern Ohio and the Mahoning Valley.
The Clinton campaign says Bill Clinton will remind people of the voter registration deadline Oct. 11 and the start of early voting Oct. 12.
His trip will include stops Tuesday at Ohio University in Athens and a middle school in Steubenville and a stop Wednesday in Stark County. Additional stops are also being planned.

Sanders will appear at rallies in Minneapolis and Duluth on Oct. 4 to discuss Clinton’s “plan to build an economy that works for everyone,” encourage Minnesotans to cast their votes early and check to make sure they register to vote, the Clinton said.

Minneapolis and Duluth were both Sanders strongholds in Minnesota’s March caucuses and are heavily Democratic.

Chris Sacca and Mark Cuban, two of tech’s most voluble entrepreneurs, are bringing their colorful show to San Francisco this week to raise money for Democratic presidential candidate Hillary Clinton.

The pair, who appear together on the show “Shark Tank,” will host a special reception on Tuesday for donors who pay $5,000. But they are also offering general admission tickets of $100 for those who want to see Sacca interview Cuban onstage at a venue in the South of Market section of San Francisco.

The third debate will have the same format as the first debate.

END_OF_DOCUMENT_TOKEN_TO_BE_REPLACED

The 90-minute debate — no commercial breaks — will be held at Washington University in St. Louis and moderated by CNN’s Anderson Cooper and ABC’s Martha Raddatz, an experienced foreign policy reporter who used to cover the Pentagon and the State Department, and a veteran debate moderator.

The second presidential debate will take the form of a town meeting, in which half of the questions will be posed directly by citizen participants and the other half will be posed by the moderator based on topics of broad public interest as reflected in social media and other sources. The candidates will have two minutes to respond and there will be an additional minute for the moderator to facilitate further discussion. The town meeting participants will be uncommitted voters selected by the Gallup Organization.

Where and when are the debates?

Who are the debate moderators, and how were they selected?

The Commission says moderator selection is dependent on familiarity with candidates and issues, broadcast experience, and "an understanding that the debate should focus maximum time and attention on the candidates and their views."

EVENT DETAILS: Join Hillary Clinton at the Women’s Leadership Forum and Women for Hillary Celebration in Washington, D.C. on October 5. RSVP to attend! 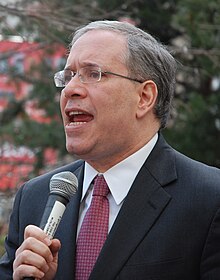 Scott M. Stringer (born April 29, 1960) is the 44th and current New York City Comptroller and a New York Democratic politician who previously served as the 26th Borough President of Manhattan.