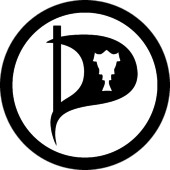 The Pirate Party (Icelandic: Píratar) is a political party in Iceland. The party's platform is based on pirate politics and direct democracy

The Icelandic Pirate Party was founded on November 24th, 2012 based on the political ideology of the Swedish Pirate Party, which Richard Falkvinge founded in January 2006, to bring about internet copyright reform.

There are now Pirate parties in over 60 countries. They each have their own policies and priorities, but all are united in calling for the protection and enhancement of civil rights, including free speech and the right to privacy.

25 Oct 16: Opinion Poll says Iceland’s Pirate Party will win– One in five Icelanders favor the Pirate Party, according to an online opinion poll run by the Social Science Research Institute at the University of Iceland, the Iceland Monitor reports…Read More


In the parliamentary elections of 2013, the Icelandic Pirate Party received 5% of the popular vote. Three Pirates became members of the Icelandic Parliament: Helgi Hrafn Gunnarsson, Birgitta Jónsdóttir and Jón Thór Ólafsson. Jón Thór stepped aside in 2015 and his deputy, Ásta Guðrún Helgadóttir, took his seat in parliament. Pirates also have one representative in Reykjavik City Council, Halldór Auðar Svansson.

Next parliamentary elections in Iceland are to be held Saturday October 29th 2016. The Pirate’s election eve party will be held at Bryggjan Brugghús, Grandagarður 5.

The Icelandic Pirate Party’s adoption of a policy hinges on the ability to root it firmly in the core policies of the party. It must also receive sufficient support in the Pirate Party’s online voting system. The online voting system is the primary method through which Pirates settle disputes and reach consensus on policies. All accepted policies are published and viewable in Icelandic at x.piratar.is.

To register as an Icelandic Pirate, visit the registration page and provide your name, address and participation preferences. In order to vote in our web based voting system, you must also register at x.piratar.is using the IceKey if one is available to you as a resident of Iceland.

The Icelandic Pirates want to adopt the new constitution because:

2. Ensure a Just Distribution of the Wealth Generated by Iceland’s Natural Resources

The headquarters of the Icelandic Pirate Party are called Tortuga. Tortuga is located by the sea in Fiskislóð 31, 101 Reykjavík, Iceland. Our email is: piratar@piratar.is and our phone number is +354 564 2000.